The popularity of museums and exhibitions is at an all time high in the UK, but the modern museum-goer expects far more than a handful of artefacts gathering dust in a cabinet. Visitors want to learn, yes, but they expect an experience that is coherent, engaging and moving as well as educational. As a result, the role of exhibition or gallery designer is increasingly important. However, design for museums remains to an extent an invisible discipline with critics and reviewers more likely to focus their praise or ire on an exhibition’s curators rather than its designers.

Nevertheless, design undoubtedly has a significant impact on a visitor’s overall experience of a museum, exhibition or gallery. In conversation with New Design, Roger Mann and Dinah Casson of interior architecture practice Casson Mann endeavour to shine a light on the detail of design for museum spaces. 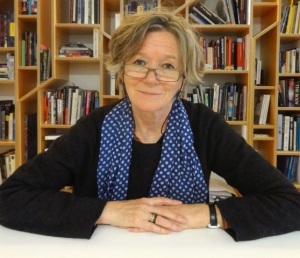 Casson Mann was established in 1984 and since the mid 1990s has focussed primarily on work for museums, permanent galleries, cultural centres, temporary and touring exhibitions, and multi-media installations. Amongst the practice’s award-winning work are the recent Hollywood Costume exhibition at the V&A, the Churchill Museum at the Cabinet War Rooms, and the Treasures Gallery at the Natural History Museum.

The practice continues to work on British projects but has also undertaken two significant commissions in France. The Cité des Civilisations du Vin, to be opened in October 2016, will be the world’s largest visitor centre dedicated to the story of wine with a series of displays exploring wine’s place in history, culture and society. Furthermore, Casson Mann has been appointed to design a visitor centre for Lascaux IV – a new digital facsimile of the famous Lascaux cave paintings. 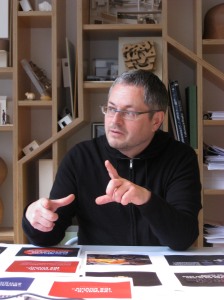 New Design So how did you first get involved in the museums sector?

Roger Mann Our early work was in commercial interiors and offices, the usual run of stuff. We did a few temporary shows, the biggest of which being a Holland-based exhibition on British Design in 1989. This whetted our appetite for telling stories; the telling of stories forces one to make decisions about the style and feel of the exhibition with some reason and purpose beyond fashion and taste.

We had a lucky break working on a kids gallery in the basement of the Science Museum [an interactive, experiential space that is still running] and that opened doors for us. By the end of the 1990s we were working on the British Galleries at V&A and the Wellcome extension at the Science Museum. Subsequently lottery funding piled in and made the sector a rather buoyant, dynamic place to be.

I’d like to think that the sensibilities of interior design come through in what we do. The importance we put on detailing, materials, quality of light and quality of space is something I think is an important aspect of our work.

ND What informs your decisions about a gallery space on the level of, say, using a particular colour?

Dinah Casson One of the very first projects we did was the British Galleries at the V&A which was essentially 500 years of British power expressed through objects. We worked with extraordinary colour consultants [led by the late John Cornforth] who knew about the history of colour as used in interior spaces. We ended up using 60 different greens and the idea is that if you were to take all the objects out of these galleries, you would still sense what period you were in. This idea of feeling something without having to read about it is something we are all trying to do.

RM If we were sitting around arguing whether a room should be blue, we could all argue very subjectively on a taste level. When we agree on the story, then the process becomes more rigorous.

ND I get the impression that telling stories is integral to your approach.

RM According to research only 17 per cent of museum panels are actually read, so everything in a space, the lighting, the juxtapositions, the interrelationships, has got to work hard to tell the story. We make everything enslaved to the single purpose of communicating the bigger narrative.

Taking the example of the ‘Nelson, Navy, Nation’ permanent gallery at the National Maritime Museum [opened October 2013], the biggest move was to take a black box gallery and to put people back over 200 years and actually make them feel like they were outdoors. A great deal of what’s going on here with the lighting panels at the top, evoking sails, the mirrors, the rigging and the oak, was to give a sense of being on board a ship with a sense of space and open horizons without too much of a tableau-like pastiche.

We had an uber-narrative then there were lots of story areas that needed a different quality. The space is a long gallery with sections off to the side. We mirrored the long wall and through the gaps there are a variety of spaces – in some of which you are on land (in Whitehall as it were) sometimes in the below decks area of the boat. Every time you go through the mirror you are into a different world, each time you come back you return to this bigger space.

DC The two curators, who were writing a book to accompany the exhibition, had never designed a gallery before. There’s a huge difference between a gallery and a book but it was very hard work to persuade them that this was a different thing, a spatial thing.

Most people read a book from beginning to end; in a gallery or museum people skip around, they are anarchists, you can set out a narrative but people rebel. Therefore we needed a bigger narrative: the idea that the navy helped to define the identity of our nation. One of the things we try to do is have a big overall spatial story rather than a number of installations. Here it’s clear: you’ve got tight, dark spaces which are like being under the deck and wide, open spaces which are like being on deck.

ND The Hollywood Costume exhibition at the V&A which you designed was a great success. Could you tell us more about this project?

RM What was really interesting was this exhibition was a celebration of the role of the costume designer and the show’s bigger narrative was about moving from script to screen. The creation of a character can be hugely imparted by the clothes they are wearing. That becomes way more interesting with normal clothing than an Elizabethan costume – you know a costume designer has been involved in that, but when you see the Big Lebowski slobbing round in a dressing gown it’s something more.

It was inevitable that we would use quite a lot of media here because the subject demanded it. We started using media in a more interesting way in close proximity to the costumes themselves to help tell the story. A plinth of small A3 screens looked at what it was in the script that started the dialogue between the film director and the costume designer as to what these people were going to be wearing. With Oceans Eleven, for example, we have highlighted sections of the script and a table projection of sketches from the costume designer’s own archive laying out the process from the script to finished garments.

ND I understand you are working on two big projects in France: the Cité des Civilisations du Vin (a cultural centre dedicated to wine) and a visitor experience around the Lascaux Caves.

RM The CCV building is a celebration of wine. The inside space is a cultural centre (not a museum) and is almost all multimedia looking at the last 6,000 years of wine making and the way it has affected religion and so many aspects of culture. It is an extraordinary project because the amount of multimedia involved is extreme. It has been quite a challenge to try to design 23 different modules which each need to tell an individual story but also relate to one big subject.

DC The word museum suggests that there is a collection of objects. If you don’t have objects but you’ve got some ideas that you want to explore, you have to think of another name.

RM The French have this ‘cité’ notion and don’t have a problem with the concept of a celebratory space that looks in depth at a particular aspect of culture.

DC The Lascaux cave paintings are about 20,000 years old and are the biggest, most multi-chromatic series every discovered. They were found in the 1940s but closed in the1960s because they were damaged by over-visiting. A small facsimile was built which is now itself a national monument. They are now building a much bigger facsimile, digitally generated, and wanted to wrap a museum around it. 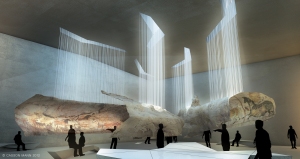 Our ambition here was to have the graphic free museum – nothing written up anywhere, you just ‘get it’ through other means. We have built up other rooms around the facsimile, one, for example, takes fragments from the facsimile and hangs them in the gallery and allows the visitor to interact with them. It is a very complex project dealing with a number of French experts who have strong and differing views. It’s an interesting process and continues to be so.

ND In a gallery space how do you manage the juxtaposition between fine art, artefacts, and multimedia elements?

RM Art curators have a dislike of their art being used illustratively. However, in designing the First World War gallery at the Imperial War Museum we have 2,000 objects most of which are bashed, brown or grey. In amongst these we have four carefully picked paintings. Yes, they are semi-illustrative, but the story they are telling and the way they are applied to the display is as much to do with helping people feel what it was like and to affect perception. Furthermore, in this particular instance, it offers an opportunity to talk about the artist themselves and the fact they went to the front with their sketchbooks and to examine the process of recording war.

As far was we are concerned, the bigger the palette the more ways we have to express the story and the more varied the visitor experience can be. If we’re reaching into fine art on one hand, multimedia and sound design on the other, we are getting an ever broader palette of options – finding a way in for everybody is great fun.

ND Casson Mann has been extraordinarily successful in museum design. Are you looking at working in any other sectors?

RM We’ve become expert over the last few years in storytelling. Museums and exhibitions are at the forefront of that world but it is apparent that other sectors are getting interested in what that can bring to a space, retail is a clear one, and hotels seems to us a natural place to tell story, especially if the hotel is in anyway celebrating where they are or the context in which they exist.

DC Every building has its own story. Any building can leak its stories out, but that doesn’t mean just a panel on the wall. With a famous building it is tempting to give it a new life and put a plaque on the wall, I think that’s tedious. What’s more interesting is when you find something, a journey of discovery as part of its new life. That’s a field of work that we’ve done some on for clients and we’d like to develop further.